A five-member Taíno delegation arrived in Jamaica yesterday to participate in the Marcus Garvey Fair to be held February 23, 2014 in Resource, Manchester. The delegation is headed by Roberto Mukaro Borrero and Gary Kamuri Gravesandy spokespersons for the Taíno nation.

Roberto Mukaro Borrero a kasike (chief) of the Guainia Taíno community; is a cultural ambassador, historian, musician, and internationally recognized human rights advocate. Kasike Borrero represents The United Confederation of Taíno People (UCTP) which was established as a Caribbean Indigenous leadership initiative or an “Inter-Tribal authority” inspired by ancient Taíno and other indigenous confederacies.

Gary Xavier Kamuri Gravesandy was born in Kingston, Jamaica. He represents the Taíno Nation of the Antilles, which is the indigenous nation of the Greater Antilles and the northern Lesser Antilles. It does not represent a religious, cultural, or any other kind of organization. Gravesandy says “The Taíno Nation is an indigenous people, collectively reaffirming its identity; embracing its culture and heritage; and rebuilding itself.” Gary Gravesandy currently chairs the Northport Veteran Administration Native American Indian American Committee and he is also the Wauxeri (Director/Head) of Department of Cultural Affairs (DCA) for the Taíno Nation of The Antilles. The DCA is the Taíno Nation’s principal agency for developing and maintaining its communal spheres by creating and/or sustaining an environment that draws from its rich cultural legacy, of past and of the present.

The Taíno delegation will perform at the 9th Staging of the Marcus Garvey Fair held February 23, 2014 in Resource, Manchester, produced by The UNIA Resource Citizens Association and the Universal Negro Improvement Association-African Communities League (UNIA-ACL) in collaboration with the Countrystyle Community Tourism Network/Villages as Businesses (CCTN/VAB). The UNIA-ACL Chapter was founded by Marcus Garvey in Jamaica in 1914. This annual fair is aimed at raising the profile of this national hero, as well as, to showcase the legacy of the Taínos who were the first Jamaicans.

The Marcus Garvey Fair, held under the distinguished patronage of Sally Porteous, Custos of Manchester, will be staged Feb. 23, 2014 in Resource, Manchester. The public is invited to attend free of cost. 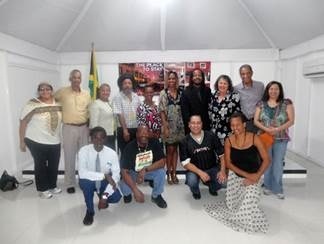